I persevere, but I don’t pretend; I deride double standard and declare the truth as I see it. I wholeheartedly believe that nobody is infallible. Thus humans, including myself, can be right or wrong. I also think that nobody can do anything to satisfy everyone. An old saw on politics, however, states that “majority carries the vote”. A politician wins or loses an election by the sole decision of the majority, the masses. I practically believe that whatever a government does should be pro-masses, for they duly deserve the reward. It is not a privilege; it is their right.

For nearly a year now, Nigerian masses have been seeing things contrary to their expectations. They are merely suffering, though their lives are, mostly, more secure now than before President Muhammdu Buhari’s government. The Buhari they knew is no longer the Buhari that rules this country. That one was an agile and sturdy soldier who was pro and for them. Today’s Buhari is a politician, seemingly confused and succumbs to the IMF’s, World Bank’s, western, governors’ and senators’ pressure, while the masses come second. The suffering, if not tackled soon, is about to reach a crescendo and could be as disastrous as the dreaded Boko Haram insurgency. While the latter cuts life shorter, the former shatters optimism, troubles minds and leads people to total despair and self-loathe. 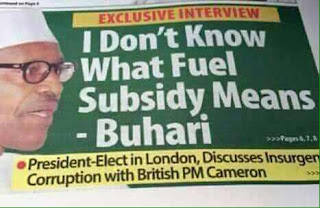 And yes, nothing good comes easy, the cliché says. But the timing of this deregulation, fuel subsidy removal, whatever it’s called, is pretty bad. Nigerians have already been going through a lot, and for the Muslims, the month of Ramadan is around the corner. We all know what usually happens to the prices of food, vegetables and fruits during that period. This year’s might be lame and dry, for it’s survival the faithful are more after than any luxury.


A few days back, a local government chairman in Kano swore by Allah to us that he had not received a kobo as a grant for the past six months! Wallahi, many people live by begging. Students cannot pay for their school fees. Prices have multiplied. People are dying in the hospitals – and resident doctors have just begun an indefinite strike! Oh, my God.

I have overheard and heard, read and reread so much funny, incredible, if not ridiculous, narratives regarding this fuel subsidy removal. How so many people take the President doesn’t deserve any mentioning. But PMB is human like us, though we have so much hope and confidence that he will deliver, and so he will by the grace of Allah.

Since the announcement of the subsidy removal, so much effort has been made to downplay its effects and to rationalise the government’s action by the untiring, never apologetic Buharists. I am sorry to say, but the more I read/hear about those desperate ‘explanations’, the more wrong I see it. The ‘rationalisation’ is often a bunch of gobbledygook. Only a few make sense, and none has yet convinced me entirely.

There was, initially, a viral message on Facebook and other social media that the federal government did not actually increase the pump price. Thus only the independent marketers could and would be selling it at N145 per litre. That false story was soon discredited when it appeared clearly that even the NNPC mega stations sell it at that price or a little lower (N143).

The following day, another folktale emerged that in Kano, a major independent marketer, AA Rano sells it at N107 per litre. I quickly went to his new filling station at my workplace, Bayero University, Kano (New Campus) to verify the claim. I was disappointed for the price was and still is N140. Some zealots still doggedly denied it. AA Rano was later on interviewed by the Radio France Hausa, and he disavowed the rumour. So, what’s left? We are waiting, for they may still doctor yet another or another narrative (s) to defend their (our) ever-right president.

With due respect, the unrepentant Buharists should not be too apathetic, please. We all feel the heat, and the hardship is excruciating. So, be careful and don’t exacerbate our condition by gagging us, or insulting us for expressing our opinions. We are not anti-PMB. Most of us also love him, but we know and believe that he could be wrong as he is now. And please, as I often say it, self-respect matters a lot. Don’t, thus, spread false news. It’s not healthy, and it quickly demeans one's seriousness and credibility.

I agree that the subsidy may have to go to save the country’s economy from crumbling, but don’t forget that governments, uniquely Nigerian, have other ways to source money other than from its citizens. Nigeria can cut expenses, borrow or even use its foreign reserve, etc. at least for a year or more until the completion of the refineries under refurbishment/construction. Poor Nigerians are literally living “hand to mouth”, without any surplus. Even the palliative the government is willing and preparing to start paying will not help any matter. We need a lasting solution, not temporal.

If we #OccupyNigeria in 2012 for the same reason, why should we be silent now? I know for sure that this government is better than its predecessor, but the living condition and the financial status of both the country and its people was not as acute as now, and yet we protested. If we cannot do the same now, I believe that the least we can do is to criticise the government as it deserves that. Let us diplomatically express our disappointment and disapproval, and without abusing or calling anyone names, to purge our annoyance. PMB too has mentioned it that his government welcomes constructive criticism.

Finally, I don’t support the Nigeria Labour Congress (NLC), and Trade Union Congress (TUC) planned strike and protest. Let us not give room for some jobless, hopeless hoodlums, who are now numerous because of the economic situation in the country, to attack non-indigenes homes and business places, public property, politician houses, etc. What peace gives, hostility takes away. These pressure groups and others should find better ways to dialogue with the government. May the government sympathise and empathise with us, amin.