As several northern Nigerian societies cry of pressing marital problems, an Ali Gumzak-directed film, Namijin Kishi arrives with an exaggerated elucidation of such a marriage. It exposes one of the countless causes of marital disputes. Gumzak's signature is all over it: direct and straight to the point rendition, keeping watchers focused and on the same page. Quite usual of this director, the film’s plot was uninterrupted by the often mundane Indian filmic romance, singing and dancing routine found in many Kannywood movies. Additionally, the background soundtrack accentuates the viscosity of the movie scenes. 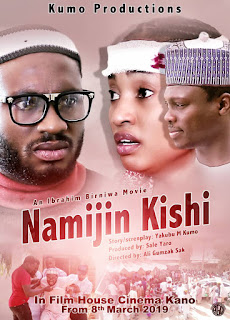 Individually, the character-performance in Namijin Kishi is excellent, more especially by the leading actor, Sadiƙ Sani Sadiƙ, who effortlessly delivered his assignment in a proper dumb-playing and gross role that I doubt if he has any fitting superior in the industry. Hafsat Idrees, the leading actress, is excellent too; her calmness is what stands out, and what's a common factor in almost all her movies.


The movie, as its name implies, revolves around an extremely jealous man called Habibu (Sadiƙ Sani Sadiƙ), who goes overboard in his attempt to protect his beautiful, loving, tolerant wife, Fa'iza (Hafsat Idris) away from the test of what he calls "influence of the devil". He interprets that to an excessive over-surveillance (of the wife) against contact, of any kind, with a man that's not him. And despite that, within their first year of matrimony, he divorced her twice, before eventually divorcing her for the third time, bringing the end to their marriage. But, Habibu truly loves Fa'iza. However, the influence of his rare jealousy compliments his lack of proper religious knowledge, which could have helped him understand his rightful role as a spouse, towards turning him into an unfair spouse, inattentive son, not-so-great son-in-law and silly brother-in-law. The depth of Habibu's extreme jealousy doesn't stop where blood-line lineage starts, for he tries isolating her from her close female friends and the entire family.

Namijin Kishi sends one loud and clear message to its viewers: the consequence of having little or no proper religious knowledge and the need for men and women to acquire as much knowledge as possible, before going into their marital homes. In spite of Habibu’s unique behavioural disorder, with some religious education, he would have manageably controlled himself.

The movie portrays the sad reality of northern Hausa-Muslim parents taking every matter to themselves, even when things start getting out of hand. The fact is, most of the times, they could control the children, but not the situation. Habibu and Fa'iza both need psychological help within the first three months of their first divorce, but instead, get accompanied into more chaos until the marriage ends irrevocably. Its high time our society understood the importance that lies in the services of therapists, psychologists and counsellors.

Despite the role of the leading character being a bit exaggerated and somehow unreal, it says something about the personal nature of northern Nigeria's spouses: over-strictness and excessive jealousy. A Hausa-Muslim husband still contemplates whether a male doctor should examine his wife whenever the need arises, or whether he should allow his daughter to further her studies, which consequently returns the favour in a full circle. So the plot isn't far off the real Hausa-Muslim, northern Nigerian society.

Besides, Namiji Kishi comes with some cinematographic slip-ups. The scene where Habib was charged with physical assault for punching Ahmad in the mouth, yet Ahmad narrates to Fa'iza that he wounds his nose, which I believe are mutually independent. And how it takes little effort and time for a man with abnormal behaviour like Habibu to change – and become a good person. And the blurring-portrait nature of the camera that sometimes shows only the character of the scene in question. And how the least familiar actors seem desperate to say their respective dialogues which sometimes make them make eye contact with the camera-man. Despite that, I happily give it 2.5/5 rating, and recommend it for entertainment lovers, and more importantly, those spouses that love judging in haste.