Showing posts from April, 2019
Show All

Muhsin Ibrahim muhsin2008@gmail.com My book, Kannywood: Unveiling the Overlooked Hausa Film Industry , released early this week, was purposely titled so. For some socio-cultural and religious related reasons, many people that would ideally care about the embattled film industry snub it. Thus, Kannywood survives mainly in obscurity. Conversely, the recent scandals involving the famous actress, Hadiza Gabon and her colleague, Amina Amal over lesbianism allegation proved me slightly wrong. Moreover, as this rages on, the age-old feud between the ace actors, Ali Nuhu and Adam Zango  was taken to the next level. The former sued the latter for defamation and assassination of character. These topics dominate the northern Nigerian cyberspace all the more. Is Kannywood really “overlooked”? It’s indisputably true that the film industry and its members are ignored but, I believe, whenever they do ‘good’ or shun controversies and scandals. Once their scandals surface, everyone’s at
4 comments
Location: Cologne, Germany
Read more 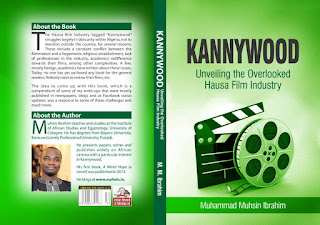 Following the publication of my book, Kannywood: Unveiling the Overlooked Hausa Film Industry , a reporter with the News Agency of Nigeria (NAN), Anita Eboigbe interviewed me. Excerpt of the interview was then carried out by several news outlets in Nigeria. Here is the full version: 1. Do you think the relegation of Kannywood has anything to do with the social, political and tribal sentiments in Nigeria? And why?  I think the sentiments you mentioned play a role, but they are not to blame squarely. First, there is a widespread belief that Hausa people are less educated compared to other (southern) ethnic groups in Nigeria. Therefore, many people think, wrongly though, that nothing good – such as their films - may come out from them. The fact that Kannywood’s movies are 95 or more per cent in Hausa makes this belief all the more plausible. I have read and heard several people, especially on social media and conferences, arguing that the Hausa folks cannot make films in English
3 comments
Read more
More posts