Showing posts from January, 2020
Show All

For about three decades, cinemagoers, especially in the northern parts of Nigeria, are familiar with Hausa Film Industry popularly known as Kannywood. Though there has been debate on a different genre of movies by section of producers and directors that say 70% of Kannywood filmmakers go for romantic melodrama and musical extravaganza while the rest of the percentage has comedy, action and epic storyline. Be it as it may, the giant industry lacks fantasy movies in its library. Falalu A Dorayi, undoubtedly one of the few directors who believe in game-changing and twisting story background to please his followers and fans, who established himself as a successful filmmaker in the history of Kannywood has finally come with a sensational fantasy flick entitled Karamin Sani . Karamin Sani , an upcoming movie set to hit screens on Friday, 17 January 2020, in Filmhouse Cinema Kano and KFA Cinemas Kaduna simultaneously, was produced by S & B Production and directed by the versa
1 comment
Read more 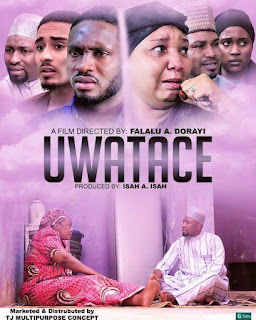 Director :         Falalu A. Dorayi Producer :       Isah A. Isah Language :       Hausa Year :               2018 Company :      TJ Multipurpose Concept Cast:              Isah A. Isah, Sadiq Sani Sadiq, Abba El-Mustapha, Amude Booth, Maryam CTV, Maryam Gidado, etc. At the time when most Kannywood films are either an overblown rehash of the industry's previous or impoverished replication of Indian movies, comes a determined film with a squarely original story from the same industry entitled Uwata ce . The film shows  quite  an extraordinary, scandalous saga between a mother and her grown-up children. Hajiya (Maryam CTV) is an older widow with two sons and two daughters all of whom are married, leaving her together with her stepson, a 22-year-old Salim (Amude Booth) whose mother is no more. The film begins with Hajiya and her servant having a chat in her room when one of her sons, a short-tempered young man, Khaleed (Sadik Sani Sadik) blows in. He is extreme
1 comment
Read more
More posts