(135): Towards True, Practical Change [in Nigeria]

Muhammad Muhsin Ibrahim muhsin2008@gmail.com   [Appeared in Onumah, C. (Ed.) (2020). Remaking Nigeria: Sixty Years, Sixty Voices.  Abuja: Premium Times Book. Pp. 340-345] Recently, headlines and social media hashtags featured Nigerians in negative light. In both the USA and UAE, some Nigerians involved in online fraud were arrested. At the same time at home, Boko Haram resurfaced in Borno, in the Northeast, and expanded their operational theatre to neighbouring countries in the Lake Chad Basin. This further dented the image of the country. Add to this, the ubiquitous “Nigerian Prince”, the ever-present title in many email scams that have been traced to different countries in West Africa.   Unfortunately, after 60 years of independence, this is not a good time for the Nigerian identity, especially overseas. By default, we are suspects of potential online scam, terrorism, among other related crimes. It is not surprising, therefore, that some Nigerians outside the country li
1 comment
Read more

- January 31, 2021
The following is my interview with the Blueprint newspaper (Nigeria) on writing, reading and related issues. You may see it on their website or the print edition of 30.01.2021, page 25. Thank you. How did your amity with writing start? What triggered it? Writing is, often, a result of reading. I started reading novels by, usually, Nigerian authors in 1999. However, I wondered why couldn’t I find books by northern Nigerian writers? There were only a very few of them such as Zaynab Alkali ( The Stillborn , The Virtuous Woman , etc.), Muhammad Sule ( The Undesirable Element ) and Auwal Yusuf Hamza ( Love Path ) in the market or the one I went to. I vowed to become a writer to tell our stories.   How was it honed? You hone your writing skills by reading and practising writing. I think there is no other better way. I read a lot, mostly when I was younger; when I had less engagement and responsibilities. I didn’t have any specific favourite genre. I read almost whatever came my way
1 comment
Location: Cologne, Germany
Read more

Muhsin Ibrahim muhsin2008@gmail.com University of Cologne   The article was written for, and published by, the BBC Hausa service. Here is a link to a slightly different Hausa version published on their webpage:  Fina-finan Kannywood mafiya shahara a shekarar 2020. The year 2020 is unlike any other in recent history. The COVID-19 pandemic has changed the world. We now have lockdown in countries; we also have to keep social distancing, wear a facemask, among other protocols. The virus batters the entertainment industries from Los Angeles to Lagos, Mumbai to Mombasa, Cairo to Kano, forcing several cinemas to shut down. Thus, shooting and showing film had to stop. Nevertheless, that boosts TV and video on demand (VoD) contents and opens a gate for new ‘genres’ of YouTube series and serials. In northern Nigeria, these include Kwana Casa’in , Gidan Badamasi , Labarina , Izzar So , A Duniya , Na Ladidi , among many others. Kannywood began the year auspiciously with a box-office hit, M
1 comment
Location: Cologne, Germany
Read more 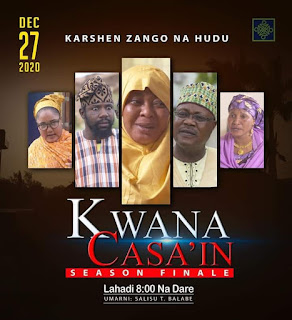 On the Final Episode of Kwana Casa’in (Season 4)   Filmmakers famously announce that “it’s a wrap” after the last camera roll on the final shooting day. It gives them, and of course, the entire actors and actresses present, an immense sense of relief. Naturally, humans want to rest and become excited when they reach the point of getting it. But, that’s the point when the post-production team and subsequently the audience begin their work – of reading the work in their way. The “wrap” always leaves many holes unfilled. Although Kwana Casa’in is, unarguably, the most expensive and expansive Hausa drama yet, the final episode of season four, aired yesterday (27.12.2020), leaves much to be desired. Hence, I felt the need to quickly write this brief ‘review’ in addition to the one I wrote in July 2019.  So much has happened between then (season one) and now (season four). But, there is no need to narrate the story as I believe most of my readers follow the series.   I start with
Post a comment
Location: Cologne, Germany
Read more

Nollywood Movie Review: VOICELESS   Director: Robert O. Peters Producer: Rogers Ofime Company: Native Media Writer: Jennifer Agunloye Year: November 18, 2020 Cast: Asabe Madaki, Yakubu Muhammad, Sani Muazu, Uzee Usman, Abba Zaki, Rakiya Atta, introducing Adam Garba, others.    Indisputable, only a few Kannywood productions attract the attention of the audience these days. Although the dialogue track and the actors in Voiceless are Hausa, the film does not belong to Kannywood. The movie, on the one hand, mounts a frigging assault, on the other hand, a serious challenge, to Kannywood. Though it’s unfair to match the glory of Nollywood and that of Kannywood, I can feel it in my bones that they must envy Nollywood for punching them and knocking their teeth out by producing the first wholly Hausa film that is now sold to Netflix. Here’s my review of the film.   Voiceless is an insurgency-inspired romantic-thriller motivated by the infamous abduction of Chibok schoolgir
2 comments
Read more

It is no longer news that the coronavirus pandemic has changed our lives and the world in general. The virus has already killed more than a million people and rendered tens of thousands others jobless. The tragic stories about the pandemic are numerous. There was a palpable fear for Africa, the most challenged continent on earth. Some analysts projected that there would be corpses littering African streets. However, the embattled continent, so far, fares much better than the rest, including Europe and North America. Likewise, some African filmmakers have not closed shop because of COVID-19. They, amazingly, do even better than ever. The makers of a Kannywood YouTube series, titled Izzar So , are some of these lucky lots.   Kannywood, the largely Hausa film industry, barely survives amidst a myriad of problems from within and outside. The biggest of them all is, perhaps, the collapse of the CD/DVD market in Kano and other northern Nigerian states. Recently, they started trying onlin
1 comment
Location: Cologne, Germany
Read more 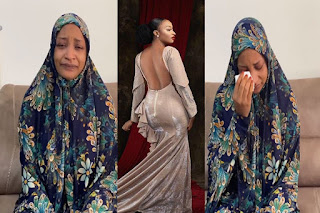 Muhsin Ibrahim muhsin2008@gmail.com   After breakfast on the morning of November 2, 2020, I turned on my phone’s Wi-Fi. I received several notifications from my email and social media accounts, particularly WhatsApp, Facebook and Twitter. Thanks to End SARS protest, I have been unusually active on Twitter recently. It’s more engaging and has become the battleground for socio-political, cultural and religious battle among Nigerians. However, the End SARS protest heightened this debate, especially between northerners and southerners who, arguably, differ on the issue. Unlike the previous days, today’s top trending topics are not about SARS at all. They are about a Kannywood star, Rahama Sadau. Although she’s not new to controversies, that of today is, I must say, provocative. It led to the creation of incendiary hashtags such as “Assistant Allah.”   Ms Sadau, this time, shared her photos on Instagram and Twitter the night before. She wears a tight, backless long sleeve, which s
2 comments
Location: Cologne, Germany
Read more
More posts