Many people welcome the month of April by the popular April fool prank; the month, however, from the year 2012, will be remembered as April foul by the family and friends of Talban Taura, Alhaji Muhd Lawan (Alhaji Abba) who lives in Gwale LGA, Kano. A tragedy befell the family on the 1st April in that year, when his 20-year-old daughter, A’isha, was murdered in cold blood, just a few weeks away to her wedding. Forgive a little digression: this is the first written tribute I am paying to anyone’s life. This is, nonetheless, not because nobody so significant in my life has died before; in fact, people dearest and nearest to me like my mother, an eldest brother and sister, among others have died. To say I miss them is literally an understatement. I never forget to beseech Allah, the Exalted, to have mercy on their souls. 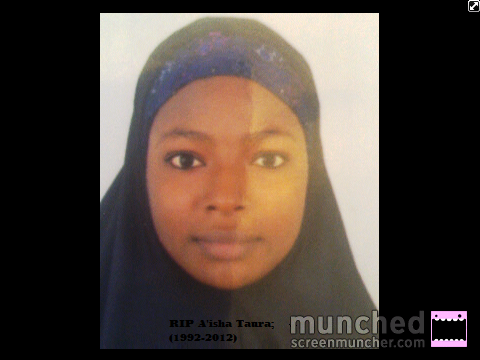 However, the death of A’isha is instead a unique one, for the cause was so unnatural, though unavoidable, fatalistically speaking. No one has to die before their time. But her murder demonstrates to all the ill and decay, and the uncertainty the Nigerians live in daylong especially in these turbulent days of the attacks by the dreaded Boko Haram insurgents. Although soldiers in the name of Joint Task Forces (JTF) are deployed in the troubled areas to combat the situation, the turmoil and the tortuous condition just exacerbates, for the protectors turned predators and therefore incompetently, freely slay the people they are meant to safeguard like Aisha.


Aisha Muhd Taura’s life was cut short at its prime by a JTF’s personnel. The inept soldier was drunk and thus shot aimlessly at another motorist who tried to flee their checkpoint at Panshekara area, Kano, when ‘strayed’ bullets fell like rain on others cars, including A’isha’s, where one travelled straight to her abdomen. Although quickly taken to the hospital, it was unfortunately too late; Aisha was beyond human redemption, and thus breathed her last in that fateful night. She left this dirty world for us to live in; for her killers to dine, and for them to live forever if they could. She’s now free from all the hustles, all the troubles, all the pitfalls and the struggles that characterise the daily life of Nigerians in most instances.

Miss Aisha, of blessed memory, was along with her family members that comprised her twins-nursing-mother, the twins, her immediate younger brother who was driving the car and whose life was saved only by sheer providence, and her younger sister. Alhamdulillah! You visited a relative, a sick, pregnant aunty; for this alone, we should not cry foul because of your loss. The Prophet Muhammad, may Allah exalt his mention, says that Allah, the Exalted, raises a person in the manner upon which he died on the Resurrection Day. Now we know that you will be resurrected en route to visit a relative, a rewarding visit in all faiths and culture.

Aisha was my student, whom I have however never taught. She was precisely a student in the college I had a stint work. Being her uncles are my friends as we live in the same neighbourhoods, she showed me a great deal of respect, and that automatically endeared her to me, and I vowed to do everything possible for her. To reciprocate my care and concern, she began to, fondly, call me “Uncle”. Once I told her: “Aisha, I’m not your ‘uncle’; I teach the Junior Classes, and you’re in the Senior Class…in fact you are graduating this year.” Her response was one of the best I ever heard a typical Hausa girl uttered: “whoever teaches in your school is equally your teacher.”

I would not be fair if I tell lies about her. Aisha, although not that well-light and intelligent, she so much liked her studies and wished to further it. Unless you interact, one would just say she, above everything, wanted to be married off and discontinue the studies. She didn’t. Besides, Aisha was gorgeous, friendly, respecting and obedient. She loved everyone, especially her family members. This reminds me of the day they sat for Hausa language exam during the West African Examination Council (WAEC), 2010/2011 session. When composing an article on an unforgettable moment in one’s life; she so sombrely and nostalgically wrote a beautiful story on how she parted with her younger sister, Zainab who had died a couple of years earlier. When asked why such a touchy topic, she told me that that was what she could never, ever forget. Oh, Allah! Today I do write the same for you, dear Aisha.

May Allah avenge the death of every innocent massacred in this way by either the Boko Haram or the JTF members, amin. May the Almighty Allah forgive all your sins and admit you into Al-Jannatul Firdaus! May He give your parents, brothers and sisters, friends and well-wishers and all the fortitude to bear your ever-lasting, ever-vacuous absence. Adieu, Aisha!
April-Fool Boko-Haram Gwale-Kano JTF Talban-Taura
Location: Jalandhar, Punjab, India