A dictionary definition of the word “trust” says: “If you trust someone, you believe they are honest and sincere and will not deliberately do anything to harm you.” Many of us used to take the famous Guaranty Trust Bank (GTB), Nigeria as such, for in addition to that word, its name includes another resolute, confirmatory word: guaranty. However, they have recently betrayed that name by acting in its exact opposite. We are now gravely harmed by them; and the bank's handlers are consistently being insincere and dishonest to us.

It was and still is a bombshell, as a friend described it, for the GTB users living in India, Malaysia, Indonesia, South Korea and St. Kitts waking up with our Naira MasterCard as a little better than a piece of sh*t. Yes, for one cannot withdraw a Kobo with it from any ATM even if one has trillions in his/her account. The bank blocked all our cards without any deliberation on the consequence of the decision. No one was forewarned, nor alerted in whatever way. We just, literally speaking, woke up and saw our cards being rejected in ALL the ATMs around. 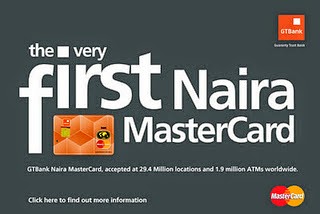 Imagine yourself on a medical trip in any of those countries. Imagine if the location of your hospital is not a metro, where, possibly, there might be other Nigerians using other banks around. And poof, this happened. And you need to pay for the hospital bills to be operated on, or be discharged, or other acute reasons. As per money laundering regulation, you can’t travel with certain amount of money in cash. Thus, you rely solely on your GTB Naira MasterCard. And you can’t receive money via Western Union Transfer from Nigeria as we are banned from this system. What on God’s earth do the GTB management expect you to do? To beg, steal or rob? Or to just lie down and die?

A few days later, after numerous, fruitless trials and retrials; futile emails and money-wasting phone calls to their Customer Services that they sent this message:

GTBank cards are enhanced with an advanced security feature known as EMV Technology. EMV is an acronym for Europay, MasterCard and Visa, a global standard for authenticating credit and debit card transactions which ensures that your funds are protected at all times.

Ouch! Are you serious? Ask yourself these questions: Is GTBank the only bank in Nigeria that ‘care’ about its customers’ safety and all that? Why didn’t they, for once, send us a prior warning that they were taking ‘measures’ that might lead to the blockage of our cards? Why are they not being honest, instead their poorly-trained, deceptive customer services always give us some dim-witted links to locate some so-called “Chip and Pin ATMs”? Or tell you to use POS, which is not everywhere and you stand to be astronomically over-charged! Why, why and why?

This can barely happen anywhere but in Nigeria. Our problems are pathetically multiplying. Mediocrity has crept into almost everything Nigerian. Elsewhere, the bank would have tendered a sincere apology for this insensitive, cruel and heedless action and would have rescinded this decision for the fear of repercussions like customers suing them to courts for damage and the like. But being Nigeria what it is, the whole case may disappear into thin air. All the uncertainties, the fear and the hardship this pointless policy caused may go, most likely, unpunished.

However, I believe there are many customers out there like me who will close down their accounts with this unguaranteed, untrustworthy bank. GTB is now a bank you should never bank upon. And if you do, it is at your own risk. Six out of our seven ‘extended Nigerian family members’ here in India have accounts with GTB. We are so lucky that two have accounts with other banks. Therefore we first transfer our money to theirs and then withdraw it. Those are the banks we bank upon. Those are the banks I would recommend you to use, but not GTB. Not any longer. We too regret it.
GTB GTBank India Malaysia Naira MasterCard Nigeria Nigerians