Why did you come to study in India if it is not better than your country, Nigeria?

Three keen followers of my blog, one Indian and two Nigerians, and whom I respect, impliedly asked me the above after reading one of my non-romantic articles on India. Yes, India is ahead of Nigeria in terms of many developmental indexes like the economy, military establishment and infrastructure. It is however ahead of it also on various other unmentionable indexes such as racism, communal clashes, maternal mortality, female foeticide and infanticide; child labour and slavery, etc. Though, mosaic as India is, you can’t, or rather shouldn’t, generalise. No hyperbole in the above comparison: each country has its good and bad sides.

My coming to India, as I said before, was deliberate and purposed. I dug deeper and had a lengthy back-and-forth over email with the university I was joining. My area of specialisation is film-related (not English as many, I mean many, people think). Needless to mention, the glamorous Indian film industry, Bollywood is famous worldwide. So you can construe the correlation. As a developing nation like Nigeria, I expected living expense to be affordable. And it is. The U.S, with Hollywood and all, would have been a better option. But going there is much tougher for apparent reasons.

India is not that a terrible choice, either. Our university claims to be one of the leading private institutions in the country. I, however, think there’s much to be desired, especially regarding academic strength. They, nonetheless, undeniably have a very good infrastructure and excellent administration. They also provide students and staff with a 24/7 high tech WiFi connection across its 600 acres campus. There are thousands of students come from many countries, mainly African and Indian subcontinent as Nepal, Sri Lanka, Bhutan, others.


Rest assured, I would naturally miss India when I am gone in a few days away. I will miss the relatively stable power supply, unlimited and yet cheap internet connection, books (as a bibliophile) and a few other pleasures on offer not that effortlessly obtainable in Nigeria. 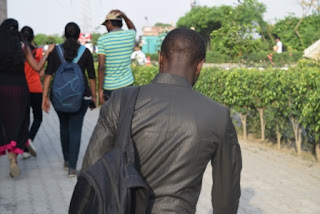 As aforesaid, India is more advanced than Nigeria. That does not, as you well know, deter me from dissecting things I have seen around and writing on the same. I have discussed with so many foreign students about their prior and present perception of India and our university. More than majority expressed an unreserved dissatisfaction and disappointment. Many of them realised the reality of what’s genuinely India when only they came here. This corroborates a famous saying that seeing is believing.

The India seen in the media, often in the Bollywood films, is chiefly an ideal India. It’s noteworthy though that one seldom sees the realistic portrayal of the country in a few other movies. Not often. Indian government do not openhandedly welcome criticism. They censor the media, especially foreign ones. A few months ago, the BBC was severely warned, nay, threatened, for broadcasting a documentary on the rampant cases of rape in the country. The Qatari Al Jazeera English channel got a harsher punishment for another petty ‘wrongdoing’ as it was taken off the air for five days. There are several other similar cases. An appalling portmanteau word: “presstitude” is used by many fanatical nationalists to refer to any local media house that broadcast any ‘un-Indian’ sentiment.

As a black African and Muslim, I, sometimes along with my wife, have faced several challenges in my two-year stay here. I have also had my good, memorable time. Often said in the many articles I wrote on the country, Indians are equally individuals as any other people. Thus, I didn’t expect to be treated in the same way by everybody. To be very sincere, the good side of the people over-weighs the bad one. But, to also be very honest, the bad side is felt and stays afresh all the more in my reminiscences. That’s the psyche of humans.

I thank Allah, first and then the government of Kano state under its ex-governor, Engr. Rabi’u Kwankwaso; my employers, Bayero University, Kano and all who supported me in whatever way from India, Nigeria and elsewhere. This is my last article in, perhaps on, India.


I forgive whoever regrets maltreating me, and wish for life to teach a lesson to whoever doesn’t repent doing the same. I know that I might have also offended someone. It wasn’t intentional, and I thus ask for your forgiveness. The value of the human being irrespective of his race, religion, region, ethnicity, etc. should not be reduced to the condescension of any sort. One World, One Love.
Farewell India Namaste Nigeria Salaam Sat Sri Akal