“Rome is not built in a day” has become the cliché President Muhammadu Buhari’s (Buharists, as they are called) staunch supporters would tell you the moment you open mouth to criticise his ‘saintly’ presidency. Who said it was? With due respect, many of us, having grown up in uncritical, dogmatic societies and cultures, fail to differentiate criticism from condemnation and nitpicking. No, they are not the same. Dogmatism has place only in religion, and there too is only to an extent. Islam, for instance, cites several signs (such as the weather, topography, miracles, etc.) as proofs for its genuineness and as a revealed religion by God, among other things. That is to de-emphasise over-reliance on dogma, hearsay and fairytale-like stories embedded in many other religions. Thus, religion is spared from all sorts of criticism.

For governance and politics, nothing and nobody is immune from any sort of criticism, constructive or otherwise. There are, in all countries of the world, two camps in the government: the ruling and the opposition. Neither is perfect, nor knows it all. Thus, while some criticisms are downright trash, unnecessary and mere fault-finding, others are positive, useful and worthy of everyone’s attention. That is why any sane government opens its door for all, grants freedom of expression and does not harass, arrest or imprison the opposition, the pressmen and sometimes even dissents unless in rare instances. Although the present APC-led government stomachs some criticisms, the government’s mostly zealot supporters do the opposite of that. 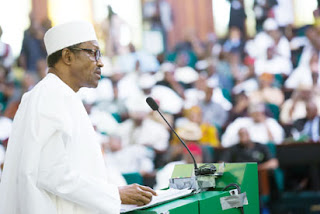 To say or align the ongoing appalling fuel scarcity in the country to the CHANGE mantra Nigerians voted for—in defence of the President—is the highest level of illogicality. But that is, unfortunately, the belief of many people for their undue love for him. That is not love; it's abominable, and pretence as nobody is spared. Any fuel-related problem inflicts much suffering on the populace as prices of other essential commodities often multiply, mobility crippled, and other forms of hardship people go through.

I am equally so much affected, as are many others, by the scarcity. I have adjusted and readjusted my expenditures time and again to the level of extreme frugality to survive. Yet, I still face the threat of bankruptcy. Thanks to the hiking price of petrol.

However, the President had, yesterday, presented his 2016 Budget. In his address to the nation, PMB expressed his “profound apology”, to quote him verbatim. That was and still is a pleasing pill, a soothing succour. I was so glad that he too acknowledges our misery, our shrinking hope and excruciating disappointment. I can't help feeling resuscitated now, for, no doubt, the President sounds very serious, honest and hopeful that things will be restored, revived and robust, in sha Allah.

For God's sake, let's stop the blind love. As I have mentioned several times before, PMB is human, thus bound to do right and wrong. He and his government require our prayers and support, not hagiological articles and the abuse of whoever criticises him. He too said that "[I] would welcome and be responsive to your feedback and criticisms". So who are you to do otherwise? It's a disservice to the nation and the PMB-led government. We also love and are very loyal to the President. We actively participated for his success in the polls. I believe he too knows that hence that apology and welcome gesture for feedback and criticism.

Besides, what is so wrong in differing with others? There is nothing wrong with that. No two people see the world through the same perspective. Psychologists say that is not possible, and they are right. For instance, you may have a similar opinion on PMB, but very likely differ on another or other issues. It’s common. Let us learn to be more tolerant, accommodating and respectful.