(76): Girl-Child as ‘Endangered’ Human in our Society

“Muhsin”, Shamsiyya (not a real name), called my attention. I answered and listened. “Come and marry me”, She finished, retorting my allegation that she was still unmarried not because she lacks suitors but for her being too choosy. It was later that I pondered on our lengthy conversation and realised that I was wrong. Many men are afraid of successful women like her. She is from a wealthy family, has two degrees and works with an international organisation. She also confided that she could not stretch the cultural perception and norms to seriously ask anyone to marry her. She would instead continue to wait for Allah’s choice. I was left in a daze.

I came back home, sat down and ruminated over our chit-chat. I then recalled Dr Muhammad Tahar Adamu, aka Baba Impossible’s lecture, back in our freshman year in the university. He one-day spent many minutes of his period admonishing the ladies in the class on relationship and marriage issues. As usual of him, he was upfront while warning them that they should accept any marriage offer from any serious-minded suitor even during their studies. Once they finish, their certificate intimidates prospective husbands. The irony, which he also stressed, is that: without the so-called Western education, they lack much value, at least in some instance. Baba Impossible cannot be more correct, for I have witnessed several such cases. 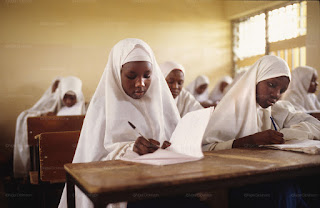 Mardiyya (not a real name) is a girl from a poor family. Both her immediate elder and younger sisters are married, while she is not. As could be expected in a traditional setting, the pressure mounts on her that she should bring forth a suitor. But fact be said, there is little or nothing she can do save to respond to whosoever comes and says he loves her. A few months ago, she nearly fell into the trap of two different men: a young, posh guy who borrows cars to come to her house and a man who is old enough to be her father. At the initial stage of the latter’s courtship, he told her that she was voluptuous. After hearing about that, her sister cautioned her earnestly and told her to be extra alert. He alas, the next day, attempted to grope her in the name of love, and that was the end of it.


I yet, again, know another woman who succumbed to such pressure. Bilki (not a real name) got married to a man she barely knew. They now have 8 children, but the marriage cannot survive. He divorced her for the third time a few weeks ago. She is left with all the kids, a majority of whom are girls. But for her brothers’ assistance and support, she would have to beg or do other menial or illicit work to look after the kids. The ex-husband gives her nothing, absolutely nothing.

The above stories are real but are only a few out of many similar or even sorrier ones. There are fewer places where women are not culturally, religiously, socially, morally, and whatnot disadvantaged throughout the world. I am Hausa, and a Muslim from the northern Nigerian city of Kano. My society is not an exception, as could be deduced from the preceding. The story is, however, not different in India, for instance.

My wife and I were in India for good two years. Thus, I was privileged to access some ‘classified’ stories on how women are treated in that ancient, culturally-bound country, though the stories are commonplace. The classified ones are, nonetheless, more devastatingly heart-tearing. India is one of the last places where women are regarded as humans as their fellow male counterpart. Virtually everything feminine is frowned at right from pregnancy to infancy, adulthood to menopause, and death. But India is not the topic of this article. Kano, as a microcosm of northern Nigeria, is.

Girl-child faces more challenges that cannot be confined to a single piece like this one. A girl child is, by her soul and flesh, like an embodiment of problems. Many poor girls languish in the river of despair, disgrace and disdain and have no one to listen to them. Their crime is only being girls. They are today the victims of abuse, rape, labour, hawking, early marriage, etc. Girl-child is becoming an endangered human among us. One may argue that so they were before. No, this is the 21st century, for God’s sake. This is the era of education – both religious and modern, science and technology, and globalisation. We risk losing them altogether.

I have, for long, observed that the freedom of a girl-child ends when she begins menstruating. All eyes will now be on her. Yes, eyes should be on her, but she should not be deprived of much of her freedom and right as a human. She should be talked to, not talked about. She should be given a chance/choice to marriage or education; and be humanised, not objectified as a sex or child-making machine. A woman’s voice should be listened to, not just heard as a complainer when her husband beats her, or divorces her, or denies her of some of her rights.

I am not squarely blaming menfolk for all the women’s predicaments. It takes two to tango. They, too, are not entirely guiltless. Some of them are often very ungrateful, rash, and easily influenced by a bad friend(s). This does not apply to the girl-child, for she is always more the victim than the victimiser.

Let us join hands to value our girl-child and women in general. They are the veins of mankind. Respect your wife. Support the education – both religious and modern – of your daughters and wards, sisters and wives. Talk to them. Often, we don’t talk to our wives, sisters and daughters. We talk more to our female friends, cousins, etc. Yes, some talk with their wives but very rarely their sisters. Women need our attention, assistance and much more. Give them that, especially money, for they need it for consumables, cosmetics, etc. Leave no room for her to beg or quickly accept a gift from her boyfriend. That gives more spaces for other things.

Let us advocate for peace and unity among married couples and support girl-child education, right and freedom. As our president jokingly/seriously said, women, do not only belong to the kitchen, the living room, and the other room, as our president jokingly/seriously said. They also belong to the hospital, school, etc. It is all about decency, respect and ethics.
Location: Kano, Nigeria