As it is with anything and everything in Nigeria, the Dapchi schoolgirls’ abduction has been politicised. Only a few people now care to, honestly, empathise and sympathise with the victims’ family. The governments of Yobe, the state where the school is, and of the Federal Republic of Nigeria and the security operatives care more to give alternative narratives surrounding the case and deflect blame than pragmatic efforts to rescue the poor, innocent girls. The girls’ whereabouts and fate are yet unknown and unpredictable.

The previous government of Goodluck Jonathan denied the abduction of Chibok girls in 2014 the same way the current one firstly reacted to the Dapchi's. One wonders how possible this is. This is a manifestation that Nigeria’s problem goes beyond leadership. I no longer quickly accuse our leaders of our plights than I do ourselves. It’s first and foremost the system which is colossally not functioning correctly; others believe it is a failed system already. The second is us - we need attitudinal change. We ought to learn to respect human value and dignity. We should, thus, collectively tell the government that “secure our schools” as enough is enough.

As the unfortunate drama unfolds, the BBC Hausa interviewed parents of some of the abductees. These embattled, traumatised people said a lot, some of which were tears-moving. The most unexpected, however, was the mention that the abduction may not be unconnected with the desperate efforts of some people to sabotage the president Buhari’s fight against the dreaded Boko Haram, the terror group responsible for the abduction. I have not heard of a more dogged defence of the president than from this man. 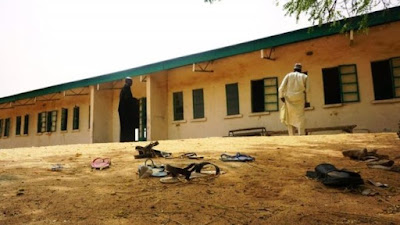 Another father vowed never to allow his girlchildren attend any modern (called “Western”) school henceforth, citing security threat as his reason. He further buttressed that the children would instead seek for husbands and get married. Asked by the reporter about the possible negative impact of this, he said that they would attend religious schools. I think this is serious and should be taken as such by the authorities.


According to reports, Yobe is already one of the states with the highest female illiteracy, adolescent girl marriage and number of girls not in secondary school (see CODE 2017). This recent Boko Haram raid on Girls Science and Technical College, Dapchi will only exacerbate the situation. It is a common knowledge that Yobe is among the least developed states in not only the north-eastern states but the entire country even prior to the Boko Haram insurgency. It does not have good infrastructure and other essential social amenities.

The girl-child has for long been vulnerable, exploited and defiled in several parts of the world, including northern Nigeria, especially in rural areas. At the risk of sounding feministic, the girl-child has been a subject of dehumanisation in different forms and manners. The Boko Haram frequent abduction, forced conversion and enslavement is instead a more brutal version of the consequence of being a girl-child. Many, in several quarters, are exposed to forced labour, loveless marriage, rape, trafficking, hawking and whatnot.

Some years ago, Kano state government declared the girl-child education compulsory and free. This improved their enrolment significantly. The policy was, however, later changed by a new administration, which eventually turned things back to square one. I am of the belief that education cannot be too expensive. However, considering the situation on the ground, I support free education for, if not all, the girl-child. Making it free is not enough, the authorities have to make sure the children attend the schools.

I can relate to the trauma that father was and is experiencing. My younger sister was at a nursing school in Yobe during the peak of Boko Haram attacks. After Buniyadi massacre of 50 plus male school boys, the group launched a daring raid at a location close to their school – I think it even spilt into the school. Terrified, she called me. I could hear gunshots in the background. I couldn’t do anything afterwards. She couldn’t finish the programme there. She was soon after that married off, though and restarted schooling – the same course – in Kano. Although I can feel his exasperation, I don’t support his sweeping decision as it will not favour the children in the long run.

In sum, the government’s plan should go beyond a rescue mission to the rehabilitation of the traumatised school girls and their parent once they are found. Their desire for education requires resuscitation. Some Chibok girls are now at universities in Nigeria, the US and, perhaps, elsewhere. This is a significant development. All others, not only the ones in the media spotlight, should be encouraged to pursue their dreams of becoming medical doctors, nurses, teachers and so on.

We should not, in any way, yield to the demands of those nihilistic, good-for-nothing beasts in the human body. I am sure they must have felt happy at the utterances of that embattled father as that is one of their objectives. We should not give up. The government should do all it takes to buoy the girl-child education in Yobe state, and all other Boko Haram infested states and beyond.

Let’s not only pray for the release of the girls; we should pressurise the government to do more towards that. However, we can achieve that without shifting blame, innuendos, name calling and cursing. We appreciate the military’s effort against the insurgents. They equally need to multiply that. No doubt, Boko Haram is degraded, but their machinations are still significant and concerning. We aspire to see them gone and gone forever.
Boko Haram Chibok Dapchi Education Girl-Child Kidnapping Northern Nigeria Yobe
Location: Cologne, Germany