Once again, a major Kannywood production attempts to avoid the clichés of forced marriage, a love triangle, intrusive music and dance routine, etc. in its storytelling. It, equally, tries to go back to the root to, of course, glorify the “good old days”. Above all, it proselytises Islam. Would the critics and the nativists alike ask for more?

Titled Risala, an Arabic word meaning “message”, the Abubakar S. Shehu’s film is completely set in the past when there was nothing we today look and call “modern”. No electricity, no handset, no car and so on. At the risk of jumping the gun, the movie is a remarkable work in a year full of punctuations in the struggling film industry.

(Warning: this section contains spoilers)
It opens with a scene of three hunters, the versatile Sadiq Sani Sadiq (Zakariyya) and two others roasting their hunted meat in a forest. On their way back home, the trio reaches a farm full of fruitful trees. They greedily pluck some and eat before proceeding. They stop at an open mosque to pray. Afterwards, the Imam preaches honesty and cautions the faithful against any act of theft. 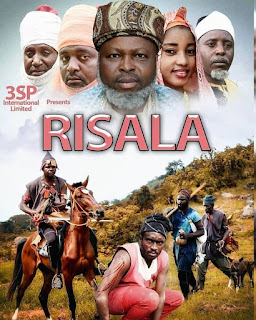 Much later, the Imam’s words dawn on Zakariyya. Therefore, he returns to him and confesses to what they have done. The Iman tells him that he has to seek the farm’s owner forgiveness. Unfortunately, however, the owner lives in a faraway town. But Zakariyya vows to go. Almost everyone opposes his mission due to the danger the journey entails, but he remains undaunted.


It is an adventurous journey, filled with intrigues and mishaps. Zakariyya is mistaken for a thief in one town, and as an accomplice of an infamous, brutal robber in another. He is arrested, tortured and then released in both. His honesty saves him. A wealthy, itinerant trader, Abubakar S. Shehu (Abdulmunafi) gifts him a bag of gold during the last moment of his life – in extremis – after armed robbers waylay the duo.

Malam Zakariyya, as he is later called for his much-admired uprightness and piety, meets the farm’s owner, Rabi’u Rikadawa (Malam Abdulmumini) at Baihan. The latter tests the former by outright refusing to forgive him and, subsequently, asking him to marry his ugliest, disabled daughter. He agrees. The wife, however, turns out to be the most beautiful lady alive. Moreover, Malam Abdulmumini gives his tested-and-trusted new son-in-law multitude gifts.

As with the traditional, tripartite pattern of departure-adventure-return, Zakariyya returns home with his stunning bride. On their first night, however, he has a nightmare with the late itinerant trader. He soon interprets it that the decease’s family are in need of their inheritance! Thus, he promises to embark on yet another mission to find them, leaving the audience in suspense and expectation for a possible sequel.

Risala is not a masterpiece, though. Few things could be done better or otherwise. For instance, there is a lack of continuity right from the very beginning scenes. The three hunters are shown walking with their hunting dogs. The dogs suddenly disappear in the next shots and no cause for that. Again, Gambo, the lethal robber, should not murder a Fulani couple, including a pregnant wife, merely because they don’t have money. He has just robbed Zakariyya of ample wealth. On this scene, again, the special effects – of blood and fireball – are too artificial. Etc.

Without mincing words, nonetheless, Risala is a remarkable film at a time when good production is at a historic low in Kannywood. First of all, the film has a very good subtitle. The directorial work is applaudable. The casting is excellent; the narrative is quite connected, the mise en scene is, regarding the setting, impeccable while it falls quite short with regards to its aesthetics. The emirs’ palaces are scantily designed. Some locations are, apparently, recycled. Etc.

Moreover, the Jos branch of Kannywood, where 3SP Production Limited belongs to, does film differently from the mainstream industry. Often, the audience accuses them of excessive presentation of violence, murders, cartoonish gun battle, hooliganism, cultism, among other grotesque portrayals. While this is not completely untrue, Shehu’s 3SP usually comes up with way better works. Some of his films are ostensibly meant to promote, even propagate Islam and its values. Watch Ana Muslim (I am Muslim). It is patterned along Shah Rukh khan-starred, My Name is Khan –a Muslim, and not a terrorist.

Both the titles of Risala and Ana Muslim are Arabic and Islamic. The former cannot be unconnected to the prominent 1977’s biopic of the Prophet Muhammad, The Message. Although Zakariyya’s depiction is in no way like that of a prophet, his demeanours and virtues are that of an ideal Muslim. In fact, one may argue that Zakariyya’s uprightness is too angelic, making the action somehow overblown.