I keep repeating to the level of monotony, perhaps, that 2018 is a different and challenging year for Kannywood filmmakers. The market is suffocated; some describe it as crashed, others say it is dead. Howsoever it really is, a few brave people still invest in it, producing quite costly films. The movie, Mariya (dir. Ali Nuhu) is a typical example. Moreover, the publicity it received, coupled with the popularity of its songs, heightened expectation in the minds of the audience. I am one of them. I waited, with abetted breath, for the film and, finally, I watched it yesterday.

Mariya does not disappoint, even though it fails to meet my high expectation. Perhaps this happened because I am keenly interested in its thematic preoccupation: girl-child. The film is such that I anticipated to fit the topic to a T, to spark action and amplify awareness about girl-child marriage, education and justice. Lo, it falls short of that not because of the story, poor directorial work or acting but for its vague plot. 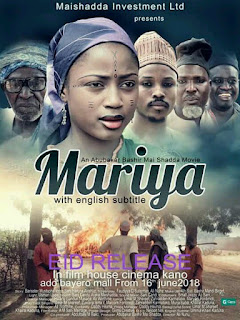 It opens with a scene of some galled youth carrying gallons of petrol, brandishing weapons. We then see the mother of jaded, eponymic Mariya asking her to take a bath. Abdullahi and his friends see the angry guys and soon conclude that they are heading towards Mariya’s house. He quickly runs and informs them. The youth reach the thatched compound, but cannot find Mariya. She and Abdullahi escape to a nearby bush. Thus, they burn it down and pursue the duo.


In the midst of a dramatic chase in the bush, the story switches to a series of flashbacks. There, the audience learns that Mariya has just been acquitted after being accused of the murder of her aged husband, Baba Karkuzu and his obsequious friend, Musa Maisana’a with poison. She is, before the forced marriage, deeply in love with Abdullahi, though she dreams to study medicine. It is later discovered that she is not responsible for the killing, his other wife, Hadiza Muhammad is. She does that to end his rampant marriages and divorces as he fails to cater for the many children there already are in the house.

One has to be very attentive to follow whose thought or narration is on. I do not wish the story to necessarily be linear or chronological, for that is often not the case with several excellent films. Filmmakers do, sometimes, willingly scramble the plot order, to make their movies some kind of a puzzle and, in the process, make it more enjoyable. However, that is not the case with Mariya. It is just that the structure is constructed quite loosely.

I can relate to how complicated the plot dynamics are to handle in narratives. For, among other reasons, it does not have any clear-cut convention. I, for instance, had to change the plot of my novel, A Weird Hope several times in line with pieces of advice by experts and reviewers. Nonetheless, I still think it should have been done differently.

Back to the movie. For example, Mariya’s first court appearance is a flashback. Ali Nuhu, the police officer in charge of the case, meets his lawyer-wife, Jamila Nagudu. She soon becomes interested in the case after watching it on the TV and promises to offer the embattled girl a pro bono service. He briefs her more about the incident in another flashback.

Again, when Abdullahi trails his heartthrob to the police station and is denied access to her, which is in a flashback, the story flips to their love relationship in yet another flashback. And more back and forth. In general, the story would have been more exciting and captivating if it were crafted otherwise.

Besides, the interspersing of the town square (dandali) song is disruptive. No one expects to see Mariya there after a tensed encounter with her uncle in the previous scene. Also, the ‘death’ of Bala (Alhassan Kwalle) is too sudden and unconvincing. Karma could catch him in another manner. Death is not always a punishment.

In general, the film is very topical and timely. I highly commend its makers. The actors also did well. Mariya (Maryam Yahaya), as usual, did excellently. The performances of the rogue, Talle (Garzali Miko); veteran Sarkin Pawa (Baba Karkuzu), and avaricious Bala are especially impressive. Likewise, the crew is outstanding. The editing, lighting and costuming ones deserve a particular mentioning.

Last but not the least, as cliched, the English subtitle is regrettably poor. While the grammar is quite proper, the dialogues are choked so much so that a person cannot easily keep pace.  I brought this up because the subtitle was added so boldly to the posters of the film. The audience, therefore, expected something much better. More so, the message of the movie is hoped to resonate beyond Hausa audience.