Kano is the commercial nerve centre of northern Nigeria, a region now known for its illiteracy and poverty with millions of children roaming its streets in search of food. The rate of ethno-religious conflict rises side-by-side with kidnappings along highways. Boko Haram also still attacks rural areas of Borno and Yobe states. The ills bedevilling this one-time prosperous part of the country are too many to discuss in a quick, brief and, perhaps, poorly organised article like this one.

Nigerian political leaders do not make things any better for the populace. Corruption remains their frailty. Generally, though, bribery and corruption have been firmly instituted in the country. They have eaten deep into our everyday life. An Al-Jazeera English journalist interviewing the then-presidential candidate Muhammadu Buhari in 2014 said that Nigeria and corruption were synonymous. Disturbing as this sounds, it is a truth. Mr Buhari unseated a sitting president Goodluck Jonathan to win the 2015 election. The electorates wanted him to achieve two principal goals, among others. One, to crush Boko Haram insurgency. Two, to fight the menace of corruption head-on. Thanks to his records as the military dictator in the 1980s.


Today President Buhari has effectively failed to meet those above two primary objectives. He has, doubtless, degraded Boko Haram by retaking most of the territories they once occupied and so on. However, many Nigerians thought as if he had a magic wand to ward off the country’s several challenges. Some observers, however, alleged that he does his best, only that the damage his predecessors did to the nation is too much. Others said that he was unprepared. Still, some pointed out that he was incompetent and cronies have hijacked the government. Be it as it may, the recent emergence of some video clips of the Kano State Governor Dr Abdullahi Ganduje collecting “bribe” from contractors is a test for Buhari’s commitment to fighting corruption. 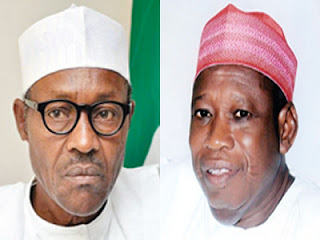 Kano has been Buhari’s vote powerhouse. He has consistently won elections in the state since his foray into politics in 2003. Therefore, the President must, or rather should, have been carefully calculating the situation. How he approaches it means so much. Against all the odds, no one doubts the massive goodwill he still enjoys in the state. Regardless of how he handles it, he stands a perfect chance to win it in the 2019 election. But that is not all. Where is the trust of millions of faithful voters in him?

The Kano State House of Assembly (KSHA) has begun a probe of the videos. They invited the journalist-cum-publisher, Jaafar Jaafar who released the videos in his Daily Nigerian online newspaper. He courageously went and answered questions under tight security. Following the hearing session at the assembly, two entirely unrelated issues surrounding the whole saga hunt me since then.

First, though not a lawyer, I am sure the KSHA is not the best institution to investigate the matter. The governor enjoys immunity, however, establishments such as the DSS, EFCC, even the police are the ones known to have experts on crimes like this. The KSHA are lawmakers, not law enforcers. Therefore, if they genuinely mean business, they should hire people with technical know-how on videography, forensics, etc. Additionally, some of the members of the house are already subservient to the governor as is the case with many assemblies in Nigeria. Ganduje reportedly bought posh cars for each one of them about two or three years ago, among other incentives that must have been exchanging hands between the two arms of government. 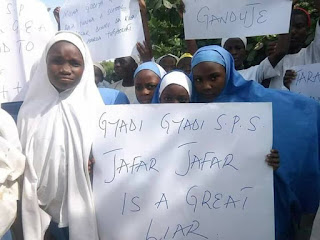 Second is the way some reckless teachers forced innocent, underage schoolchildren to demonstrate against the journalist’s appearance at the KSHA. In the pictures being shared on social media, the children looked mystified and oblivious of what was happening. They were supposed to be in their classes attending lessons as their mates elsewhere. The witlessness of this action is too gross and, thus, every well-meaning person across the country should unreservedly condemn it. We are better than this. Governor Ganduje's political force’s confusion should not infect unsuspecting boys and girls. They lack an ounce of idea on how to fight this video hurricane. What they did now is one of the lowest actions in the history of Nigerian politics.

To be fair to the embattled governor, however, he might not be aware of this show of shame. It could be a work of supererogation by some zealots. Whatever it is, I strongly condemn the sheer stupidity. I call on NGOs and others concerned about the wellbeing and education of children to launch and sustain pressure groups until the perpetrators of this insanity are punished. The government already performs very poorly regarding education in the state. The backlash over the children’s ‘protest’ is significant, because it exposes the government’s contempt for, if not an abandonment of, education.

Frankly, Ganduje’s government is anti-education. Early this week, the BBC Hausa reported that Kano state-sponsored students in Cyprus were still languishing in penury after several calls on the government to pay their fees and stipend have fallen on deaf ears. Now, they do face not only expulsion from their universities but also eviction from their residents. Worse still, some cannot even buy flight tickets to return to Nigeria. It is all the more worrisome because the majority of them are women.

Engr. Rabi’u Kwankwaso, the immediate past governor of Kano, scrapped fees for all schools for the state indigenes. That was done without a comprehensive financial model. He also sent students abroad without, as alleged, much feasibility study and prioritisation considering the imminent recession the country experienced. Still, Dr Ganduje’s take on both cases are defective and politically wrong.

Ganduje misplaces priority by doing needless infrastructural projects like flyovers. If he cannot sustain the free education for all, it should remain so at least for the girl-child. Moreover, the governor should instead bring back those overseas students and get them placed in our local universities. Sokoto State governor, Aminu Tambuwal did the same. That is way more honest than abandoning them to fend for themselves or die in limbo.

Beyond the “kickback” collecting video imbroglio, the truth of which I pray will eventually surface, and the culprit(s) punished, we need to respect and prioritise education, especially of our future generation. Else, we continue to lag in every facet of development. We now top the list of virtually everything negative. It is sad.
Bribe Education EFCC Ganduje Jaafar Jaafar Kano Kwankwaso PMB Scandal
Location: Cologne, Germany