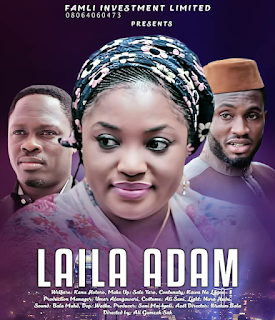 Although Ali Gumzak-directed Laila Adam’s release year reads 2018, it is released in early this month (January 2019). From some indications, one may argue that the new year looks auspicious for Kannywood. As per my assessment, there were fewer good films last year. Therefore, I had to struggle to find movies worthy enough for the BBC Hausa’s top 10. Admittedly, some that I included on the coveted list should not be there, but I couldn’t help it.

Played by the talented Aisha Aliyu Tsamiya, the eponymous Laila Adam is happily married to Aliyu (coincidentally acted by Ali Nuhu) and blessed with a curious daughter. Their married life is hunky-dory as she means the world to her loving, caring husband and he repeatedly proves that. The peace is, however, soon interrupted when Safwan (Sadiq Sani Sadiq) comes to her life. While crossing the road, after shopping, he accidentally hits Laila with his car and wounds her palm. He profusely apologises and offers to take her to a nearby dispensary for emergency treatment. As they cannot find any “chemist” (it’s called in Nigeria) close by, he takes her to his well-furnished house. This eventually leads the duo to start a licentious relationship.


Apparently, Laila Adam looks abroad in many respects by copying straightforward Bollywood-style romance movies. It, in other ways, seems local by exposing a not-very-common problem in Hausa community, i.e. marital infidelity. For instance, Laila would not ideally agree to follow Safwan to his home, even though she later inquires where his wife is, but that comes after she is seated in his parlour. Another reason is its anti-climax. Aliyu would not tackle the situation the way he does after being told by a friend that his wife was cheating on him. It looks not only foreign but also too fictitious to follow the man your wife sleeps with, listens to his stories of their sexual escapades and then just reveals that she is your wife. No fight, no police case, no nothing.

The director, Ali Gumzak is what I can call unpredictable. He does the excellent, the good, the bad and the ugly in his directorial works. I am wondering where to accurately categorise Laila Adam. It is, definitely, not among the bad but it is also not excellent. Good, perhaps. The trio of Aisha Tsamiya, Ali Nuhu and Sadiq Sani perform wonderfully. Yet, some gaps in the story – and, here, the screenwriter is also responsible – are too evident and wide. For instance, there are unnecessary, interruptive dream sequence and flash-forward that, in the end, do not happen. Also, Safwan tries to blackmail Laila when she quits seeing him by sending her ‘nude’ pictures to her home. He tells her that he would send the same to her husband if she didn’t return to him for, he knew everything about her. However, it turns out that he has no earthly clue who Aliyu, her husband, is, therefore, (he) confides in him about their affairs on the first day they meet.

Moreover, Aliyu leaves Safwan at a restaurant to attend to his ailing wife who faints due to shock when the latter threatens to sleep with her sister the same way he does with her. Surprisingly, we see Aliyu at Safwan’s house, even though they did not exchange contact before parting. There are also other visible, though avoidable, blunders here and there.

Notwithstanding the above, the film’s theme, tabooed as some people may say it is, is topical. It is also handled quite skilfully, without crossing the Hausa-Muslim redline of common decency. In all the scenes Safwan and Laila see each other, their overtures for sex are shown very minimally. Equally, while Safwan is a lecturer, the movie does not reaffirm the ubiquitous narrative that lecturers are sexual predators. He doubtless is such, but his victims are not necessarily his female students. They can be married women!

Besides, considering the film’s beautiful cinematography, the actor’s impressive performances, original background score, among other positives, I rate it 2.5 over 5.