No film was released this Eid for obvious reasons, of course! Last year’s Eid saw the release of the Hausa film KARKI MANTA DA NI. This is my short review of the film.

The movie, Kar Ki Manta Da Ni is an intense love story presented in the style of the Indian romantic drama films. This is not a surprise, looking at the career of the film’s director, Ali Nuhu, who is well known for making Indianized Hausa films. Like in one of the ‘whiz kid’ director’s previous flicks, particularly Ni Da Ke Mun Dace, the male lead of this film is a musician who sings, plays instruments and always carries a guitar on his back. This is a typical romantic hero portrayal in Indian cinema. 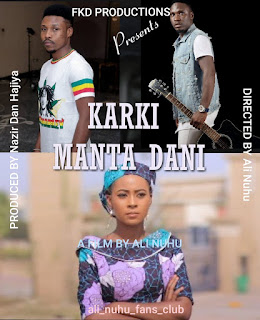 The storyline focuses on Nasir (Shamsu Dan’iya) and his love, Fatima (Maryam Booth). They are genuinely in love with each other, but as Nasir doesn’t have enough to get married, he loses her to a wealthy scion Isma’il (Umar M. Sharif). Consequently, Nasir resorts to drugs, turning his highly promising life into a hopeless one. Later, his stepmother’s relative Abdul (Ali Nuhu) learns about his mess. Abdul rehabilitates Nasir and graciously sends him to university after his recovery. Meanwhile, Fatima’s marriage fails, and she, therefore, chooses to further her education. The two separated lovebirds reunite in the university and share an emotional reunion in the end.

The narrative of the film is blended with many pleasing songs, shot extravagantly in impressive and scenic locales in Nigeria and the Niger Republic. The lovebirds’ reunion is shown in a partial song scene which has Fatima reciting some lyrical verses that remind Nasir of their love the same way Rishi Kapoor is reminded of Sunita in an Indian film Yeh Vaada Raha (Dir. Kapil Kapoor 1982).

The film is about ‘failed relationships’ that often ensue when the young men involved are not prepared for marriage. It shows how they suffer more pains after the breakup than the young ladies involved and therefore, leaves a great lesson for us to learn. It, however, brings to the public notice the role of ‘psychiatrists’ in the rehabilitation of drug addicts. Rehabilitation centres are neglected by the government today, and not many of us know that independent psychiatrists can play a significant role in the private rehabilitation of the addicts. Therefore, the subject matter of the film is considerably topical and timely.

Indeed, most Kannywood films are weakly produced, but this film is well executed. It is thoroughly entertaining, and as a romantic film, it has the sensitivity it deserves. So, it is praiseworthy for that and its flawless dialogue. The film is yet not perfect. Its few slips are outlined below.

1.     In a scene where Fatima texts Nasir to notify him of her arrival in his workplace, as Nasir views the text on his phone’s screen, a different conversation is seen in the thread rather than a normal conversation between him and her.

2.     Fatima’s father is shown as a relatively rich, elderly gentleman. There is a car parked in his house. How he is seen on a commercial tricycle in one scene and how he gets carried away by Ismail’s family wealth and marries his only daughter off to them without any background check, despite all the good qualities he seemingly has, leaves the audience confused.

3.     The later revelation that Abdul is the one who enrols Fatima in the university contradicts what Fatima tells Nasir previously.

Nevertheless, the casting is generally excellent; the leads (Shamsu Dan’iya and Maryam Booth) are very controlled. They deliver their lines effectively and emote convincingly. The actors’ performances clearly indicate that the director handles them well.

Finally, Kar Ki Manta Da Ni is a modern-day film that would not sit well with nativists and academic critics, but the youths, which are undoubtedly the target audience, will find it very appealing. I rate it 3 over 5.