I knew nobody in Cologne, Germany, when I came in late August 2017. Although that was the second time I travelled to a foreign country, the first time was completely different. I was with my wife and a friend, while other friends in Punjab, our destination, were waiting to receive us. Thus, there was no confusion whatsoever. However, at the Cologne airport, I felt adrift. I spoke with a kind friend living in another city not far from Cologne. He tried his best to guide me on what to do, but I felt more tangled. Finally, unsure of where to go, I dragged my bags to the exit.

A frail-looking old man, raising an A4-size paper with “Barka da zuwa, Malam Ibrahim” written on it, approached me. I didn’t know about his coming, and I wasn’t used to being addressed as “Ibrahim”, my surname. His smile and his “hi” halted my bewilderment. He spoke to me in faltering Hausa, adding to my surprise, and asked to hold one of the bags. I respect old age, so I declined. As he insisted, I let him.

Honestly, I also thought he was a messenger who forced himself to learn a little bit of Hausa to impress a ‘senior’ colleague coming from abroad. But I was from the Global South. How could I be regarded that highly? Anyway, that’s the ‘standard’ in many Nigerian universities – departmental drivers or ‘junior’ staff members fetch a guest from the airport.

We went to his car in a tall, stunning, semi-automated parking space that resembles the ones I saw in films. Although everything was foreign, I felt déjà vu, thanks to the countless Euro-American films we grew up watching. He told me that he was taking me to my shelter. He added that if I so wish, I could come to the university the next day. 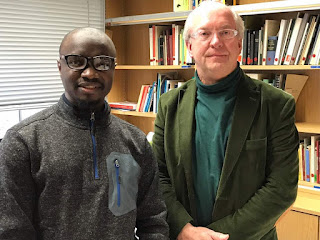 As he drove through the beautiful, busy city of Cologne, he tried to keep the conversation alive. I guess I did not pay much attention to what he was saying as my attention was elsewhere; almost everything around looks marvellous. Finally, we reached a residential area, my new home. He handed me over to an old landlady about whom I once wrote. In brief, for the next four months I lived in her apartment, she treated me like her son.

What I saw the next day at the university in our Institute left me dumbfounded and embarrassed. The man I met yesterday was Gerrit Dimmendaal, a globally renowned, accomplished professor and an immediate former director of the Institute. He welcomed me more warmly. I thanked God for home training; I didn’t disrespect him in any way.

The next few days, he proved to be even kinder and more welcoming. He brought sweaters, several Hausa books, fruits, etc., to me. Our relationship blossomed in such a way that almost everyone at the Institute noticed. We even taught a course together as he knows Hausa grammar so well, perhaps more than I do!

I am very grateful to this eminent yet humble and generous professor who retired early this year. I wish him all the best in his post-retirement life in his home country, The Netherland. I equally thank Ahmad Salisu and Hajiya Zainab Abubakar for their rare assistance to me after I arrived in Cologne. The latter two live in Bonn and work for Deutsche Welle, Hausa Service. May Allah reward them, amin.

Muhsin Ibrahim works and studies at the Institute of African Study and Egyptology, University of Cologne.