Gidan Badamasi: A Short Review of the Hausa Sitcom

Premiered in 2019, the defining criterion for the popular sitcom, Gidan Badamasi, is comedy. However, it tells much more such as several socio-moral lessons. That is not a surprise as Kannywood, the film industry whose members wrote, produced, directed and acted in Gidan Badamasi, are known for promoting such causes. An oft-repeated raison dêtre of Kannywood, some of its members argue, is to teach morality, promote Hausa culture and Islam, among other related goals. Whether or not they do that is debatable and, of course, outside the scope of this short review.

The title, Gidan Badamasi [Badamasi’s House], implies where the drama takes place – the house of Alhaji Badamasi. He is a wealthy, wheelchair-bound businessman who had multiple marriages from which he got several children. As he ages, becomes more frail and sickly, he asks most of them – he doesn’t know all of them – to come for a crucial meeting. After their arrival from all corners of the country, Alhaji Badamasi promises to give each one of them the sum of five million naira. Unfortunately, however, his ill-health strikes, causing him to fall into a coma-like condition that can last for six months. Disappointed, they frantically do so much to revive him, including calling on native and modern doctors. He can’t recall his promise after waking up. So, the hunt for the money drives the entire action of the drama in season one and two.

None of the children, some of whom look old as Alhaji Badamasi’s younger brothers, has ever enjoyed their father’s massive wealth all their lives. All but two of them had their mothers divorced a long time ago. Therefore, they all grew up outside the mansion. No one can yet tell how many children he has. Nevertheless, among the ten that have come to the house so far, only one, Tani (Hadiza Gabon), a medical doctor, lives a decent life. So, they all wish him death while also, scheming so hard to procure the money they believe is in the house – and, subsequently, in his farmhouse or Tani’s house.

The drama features an array of actors, old and new faces. They include Falalu A. Dorayi, Nura Dandolo, Magaji Mijinyawa, Hadiza Gabon, Mustapha Naburaska, Ado Gwanja, Sani Dan Gwari, Umma Shehu, Hadiza Kabara, Tijjani Asase and so on. The crews include Falalu Dorayi, Nazir Adam Salih, Nasir Ali Koki, Muhammad Sardauna and a host other equally well-known and less-known personnel. There are multiple screenwriters and directors for the show as there are for similar productions. With harmony, care and coordination, such a process works faster and better. It pays for Gidan Badamasi, too. The narrative is linked quite seamlessly, and the directorial work is top-notch. Falalu A. Dorayi, a leading character in the series and, I believe, the team leader of the crew, is doubtlessly a multitalented artist. The production bears his company’s name: Dorayi Films and Distributing Ltd.

The embedded messages in the comedic rendition of the drama are quite many. One, it attempts to reorient parents to help their family when they are still alive. Stockpiling wealth (money, property, other assets) for yourself while your children live in penury is a bad idea. They will wish you dead, and once you die, they will celebrate your death. You are more useful to them dead than alive. We see the same in Gidan Badamasi. Despite his age and health challenges, Alhaji Badamasi stashes bundles of dollars in a safe as if he were going to his grave with them.

Two is the subtle exposition of the danger of indiscriminate marriages and rampant divorces among Hausa people. There are many Alhaji Badamasis out there who, as the saying goes, replace wives as they do their caps. Regrettably, they keep getting more wives as long as they have money to shower on their prospective in-laws and wives. In the end, the crash of the marriage endangers the future of the children born in the union. They care not about their feeding, health, education and general wellbeing. From all indication, Alhaji Badamasi’s children, including his eldest son, Dankwanbo, were raised in the same situation. It’s only Azima that goes to school while Tani has a career and lives a comfortable life with her husband. The rest include two petty gamblers, a fake Malam, imposter, paramour, a thief’s wife and two others whose living standard is nothing to write home about – i.e. Dan Gwari and Shaharani. 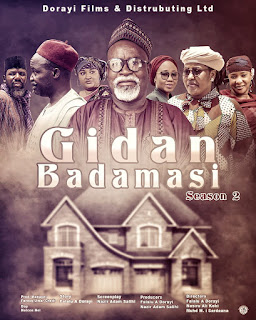 Three is a lack of trust among family members, thanks to the fragmented nature of the whole family. Some members do not only mistrust their siblings, but they also don’t know them. In several instances, when a member comes up, he or she has to remind others who are they, and so on. So, Alhaji Badamasi is entirely responsible for planting the seeds of the mistrust and disunity among his children. Moreover, he too trusts his associate, houseboy and maidservant way more than his kids.

While the above ‘lessons’ are not exhaustive, there are also gaps in the story. First, there is a near-to-complete absence of flashback. One of the distinctive features of video is its audio-visual characteristic. Therefore, audiences should not only hear about past events, background information, or characters’ history, some of them essential to the story, but also see them through flashbacks. Viewers of Gidan Badamasi may be asking: who were Alhaji’s wives? Who raised the children? How were their lives before the start of the series? Etc. The filmmakers should answer these questions in the subsequent season(s), and that will add flavour and intrigue to the drama.

Second, how or why is Gimba not Alhaji Badamasi’s son? It’s unconvincing to cast him that way while his elder and younger sisters are Alhaji’s children. Maybe, like the point I raised previously, a brief flashback should be used to solve this puzzle. Likewise, Dankwambo’s makeup and costume make him look ‘too’ old to be Alhaji’s son. He seems more like his younger brother. Despite that, Dankwambo is one of the best actors in the series.

Finally, I say kudos to the actors and creators of the drama. Arewa24, too, deserves praise for buying the rights to broadcast it to a broader audience. Comedy is a popular genre that, nonetheless, lacks much respect in the world of arts. It’s understandable, though, as people have a different if not opposite sense of humour. But, often, there is more beyond the glee. For instance, the colonialists knew that too well when they banned Charlie Chaplin’s movies in their African colonies in the early 20th century. So, Gidan Badamasi, also, contains interesting messages that any discerning audience can relate, receive, reflect on and relay.