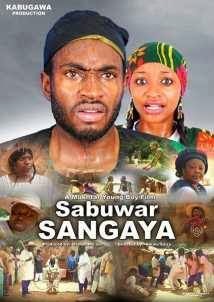 Background
Only a few of the Kannywood productions, especially in these days, attract the attention of the audience and a fewer are awaited before their release. Sabuwar Sangaya scored both credits. This is however apparently connected to its title affinity with the famous film with a similar title: Sangaya, and whose song of the same name became a landmark success for both the Hausa filmmakers and the film-making industry. The ‘old’ Sangaya was produced by the recently revived studio, Sarauniya Production and directed by Aminu Muhammad Sabo, an erstwhile leading figure in Kannywood. But does this ‘new’ Sangaya satiate the thirst of the audience? Does it meet their expectation? Will it follow the path of its ‘elder brother’? Here is what I think.


Plot
Sabuwar Sangaya is basically a romantic-horror film. Set in remote Fulani clusters, it begins with the much-hyped Rahama Sadau as Jimmala and the soft-spoken Sadiq Sani Sadiq as Jimrau being chased by some lightly armed men. The duos are on a mission to elope, for their marriage proposal is denied by the father of Jimmala. He is of the belief that his aspiring son-in-law was not a legitimate son of his father as Jimrau’s mother was abducted and allegedly raped on their wedding day. Eventually, destiny takes the lovebirds to a nearby plague-ridden village, which is suffering from an uncommon virus of deadly witchcraft. The affected villagers behave in a vampiric manner, hungrily sucking the blood of their fellows and eating their flesh. A single bite transfers the disease. Hence it is widely spreading.

Consequently, anyone infected is decreed by the stern Village Head to summarily face the death penalty. The judgment is carried-out without prejudice or sympathy, for both his confidante and his witch-hunting son are executed in the process. Jimmala gets afflicted in the hunt of one predator she had a nightmare of. They therefore quickly fled, missing their parents who have just located their children’s hideout. The local vigilantes sent after them are unlucky as the escapees have gone very far away. At night, they meet an old, fugitive boat rider near a river who unhesitatingly assists them by misleading the vigilante personnel. He afterwards boats them off the coast and gives them mattresses to sleep on. Although Jimmala had lunch earlier with her first prey, a Fulani milk hawker who offered them help, her thirst for blood grows again. The following morning, Jimrau wakes up and finds her having an early breakfast with the old man's entrails.

Jimrau, now shockingly furious, lambastes her. Jimmala becomes enraged and despaired, and therefore attempts to drown herself, but he averts it. They roam for a while, and her desire for blood intensifies once again. After a fruitless, repetitive offer of himself for her meal, which she narrowly refuses out of affection, he leaves to find water for her. He returns and meets an empty space, and later following a rigorous search, finds her surrounded by policemen, who are called for from the city. She bites him. In the end, they both are cured in the city hospital, and the rest of the village dwellers are immunised. Jimrau and Jimmala finally marry and live happily ever after.

Critique
The title of the film is confusing: while it was/is Sabuwar Sangaya on its posters and in the advertisements, it is differently written as Sabon Sangaya in the film’s opening credits. Apparently, a little careful scrutiny would have corrected this simple misprint. Similarly, the audience might have been wondering why the film was named Sabuwar Sangaya, for it’s not a pastiche, revaluation or revision of the ‘Tsohon’ Sangaya, save the similar Fulani portrayal. Though that is, and should, not be a problem. However, while the other Sangaya remains dear to the audience for more than a decade, only time shall decide the fate of this one due to, among other possible reasons, the following:

Verdict
This skeletal review was motivated for the film’s being a work of the “Best Director” of the Industry. Second, many fans of Kannywood had longed for long to watch the film as mentioned earlier. It’s with unsolicited sincerity I want to add that the ‘mighty’ Aminu Saira’s also recently released film, Birnin Masoya shows, to an extent, the “eloquent” director’s lapses, and his virtuosity diminishes. The film is filled with disjointed scenes and fragmented storyline. According to the auteur theory, the director is to be praised or blamed for the success or otherwise of any film ala an author for his book’s accomplishment or disappointment.

Besides, the overall judgment on Sabuwar Sangaya is that: although the film has come with a new genre in Kannywood similar to the Hollywood’s vampiric-horror movies, it, however, lacks an appropriate conclusion and convincing artistic composition. However, the picture and the sound quality are good. Again, it’s though observable some characters fake their Fulani accent in their speeches, the performance of the leading actors and a few others is realistic. The film may well be accepted for its much publicity, song and dance routine and the novelty of its thematic presentation in addition to the title issue. However, it could have garnered more crowns had the director polished it the more.