It’s a familiar saying that common sense is not so common. Many people regard this saying as silly, or worse. However, evidently enough today, lots of happenings around the world are corroborating it. Common sense is indeed getting scarce and scarcer by the tick of a clock. Humans’ faculty is becoming faulty and faultier. Bad is considered good and good as bad. Right as wrong, wrong as right. Demarcation line between almost anything hitherto thought as positive and/or negative is being thinning, blurring and shall soon vanish.

A weirdest law was given a nod in in the past week. Adultery is now legalized, and soon thereafter, condom maker's shares surge. Fornication has since been permissible in many countries, though, provided the persons involved have reached puberty and there’s no compulsion. Wonder; this new, lewd law was virtually nothing sensational, even on the social media as other, perhaps more pressing, news eclipsed it. It nonetheless remains a sensation is my sense. I couldn’t, and still can’t, put up with the irrationality and animalism of the law. This is doubtlessly a bad omen for the disappearance of Common Sense.

However, some may argue that decriminalization of same sex marriage is as much wrong. Yes, it is no less wrong, but not as much. Think about it. Now you have no case whatsoever with anybody you caught having an affair with your wife. Your wife! It’s now okay for either or both officially married partners to have extra-marital affairs even if either or both couples are aware of that. How obscene! 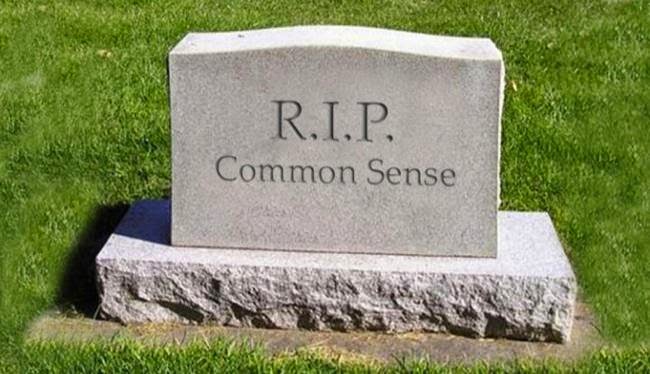 I am afraid but common sense is more than dying; it is going to extinction. Murder is literally okayed by some so-called jihadi extremist groups. Abubakar Shekau, the leader of Boko Haram has in one of his video messages called on his disciples to simply kill whoever they see. ISIL have been doing the same. To them, murdering anyone that does not share their rogue ideology is lawful and even rewardful.  At a state level, the Israel Defence Force can shoot dead Palestinians and hardly any punishment follow.

Again, in some countries and cities, smoking cannabis is approved. The recent in this horrible, anti-health campaign is the , the capital of the Other countries like Czech Republic, Columbia, Costa Rica, Jamaica, etc have already legalized it and perhaps some other killing-drugs. Soon others will follow.

Inasmuch as I try to refrain being proselytizing so often, I believe it’s worth doing here. Being Islam a divine religion, it takes human’s physiology into cognizance and thus allows a man to have multiple wives under certain conditions such as an ability to judge fairly among them, wherewithal to cater for them and so on. Likewise, a day or days for each wife is/are stipulated, etc. Allah, our Creator, knows the psyche and the desire of His Creation. Had that been observed, no need to go to that extent as authorizing multiple sex partners; I am sure many people would not agree to this. It will create lots of conflict, for we are naturally jealous.

The earlier we realize the aforesaid, the better for the humanity. I hope and pray that someday murder will not be generally legalized. If it does, then our societies will be like a jungle: only the fittest can survive. Though I don’t think even animals will ever go down to that intellectual and moral bankruptcy of allowing others to have sex with their wives. But for us, humans, it’s really a heart-numbing and a very dire for the future. Rest in peace, Common Sense!
Adultery Boko Haram Common Sense Fornication ISIL Islam South Korea U.S