This is a short response to the letter written by Professor Dahiru Yahya, dated 22 February 2016, to the abovementioned commission of inquiry. A number of concerned Nigerians have reacted to the latter, mostly on the social media. However, not everything is said. There is always something more to say on everything. Thus, below is my succinct (or so I hope it is) commentary. I suppose you have read the Prof.’s letter, for this piece is a rebuttal to the major and more fallacious points he postulated. I welcome your own reaction to this rejoinder.

1) First of all, Prof. needs to realise the fact that WE ALL are concerned with the wellbeing and the future of this country. We do not have any other country to call ours except Nigeria. Thus, it is not only about one’s kith and kin, it is about all and sundry. Thus, we hope and pray to see peace reigning in all its nooks and crannies.

2) Nothing is hidden under the sun. Records do not lie; it is in fact a ubiquitous knowledge to everyone that Prof. is, definitely, either a full-fledged Shi’ah member or a staunch Shi’ah sympathizer. Since the release of the letter in question, several pictures of him flanking Malam Ibrahim Zakzaky, the late Turi, and other top Shi’ite officials in different locations in Nigeria and abroad have emerged and gone viral on the Internet. There are much more corroborative proofs.

3) Prof. alleged that Izala is a foreign import, so also is Shi’ah. The latter is even a more recent import than any other sect in Nigeria. I am sure Prof. picked up, or became fascinated by, the ideology much later in his life, most likely in the post-1979 Iranian Revolution. 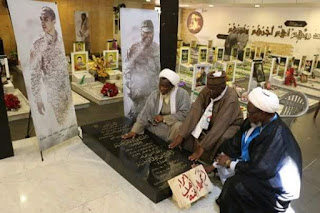 4) Prof. might be right that Governor El-Rufa’i’s speech is tendentious, but his letter is absolutely nothing different. Whosoever reads it will testify to the fact that he favours a particular sect and undeservedly disparages another, which has nothing or very little to do with the predicament of the people whose right he defends.

5) Describing what happened as a premeditated incident is being economical with truth. Nigeria Army could have annihilated the entire Shi’ah members there present and destroyed every single structure they own had they wished, or planned, for the confrontation. It is however the Shiites’ who had prepared for it for obvious reasons some of which are:

i. Their leader, Malam Ibrahim Zakzaky had earlier suspected the army, though he did not openly say that, for attacking his followers in Kura, Kano in spite of all evidences that Boko Haram were behind the attack.

ii. Shiites had a prior knowledge that the Chief of Army Staff (COAS) was passing by the area, hence took up arms –machetes, sticks, stones, projectiles, etc. Thus, they waylaid the army, falsely thinking that the army was ill-prepared.

7) Even in Islam one is given right to defend oneself. Shiites fault is not only blocking the roads but attacking the COAS convoy with sticks, machetes, stones and projectiles. Nobody would expect the army to continue begging the already agitated, armed, though gullible Shiite members for a way while they could clear it and pass, as they eventually did.

8) I am actually ashamed to read this from a professor of history: “The SUNNI are always associated with POLITICAL POWER and SHIAH demonstrate a SPIRITUALLY AND MORALLY A HIGHER FORM of Islam.” What are the causes of The Iranian Revolution in 1979, the Lebanese Hizbullah’s creation/formation, the Yemeni Houthis emergence and campaign, etc? All these have nothing to do with spirituality or morality.

9) The division did not start with the death of the Fourth Caliph, Ali Bn Abi Talib. There were pockets of Shi’ah since after the Prophet’s death who, wrongly however, thought that Ali Bn Abi Talib, being his cousin and son-in-law, should be the first to lead the Muslims, and not Caliph Abubakar.

10) All the hues and cries made by the so-called military experts of other countries are immaterial, and Iran’s, in particular, is meddling into our affairs. Nigeria is a sovereign country with its unique challenges and problems. If those countries truly cared for our security, tell us what they have done to combat the menacing threat of Boko Haram, for instance?

11) Shi’ah is of course “a state within a state” as the President rightly said. Zakzaky and co, with overt moral and monetary assistance from Iran, dream to do as the Houthis did, and continue to do, in Yemen; or Hizbullah in Lebanon, etc; or for him to be another Muqtada Al Sadar of Nigeria. There are several precedents to cite and to be concerned about.

12) If I agree that Al-Qaeda, ISIL, Boko Haram and so on are Sunnis, why do they fight their “mothers”? Let us stay in Nigeria: we all know who claimed the responsibility of the murder of Sheikh Auwal Albani of Zaria, a renowned Sunni scholar. We know who, allegedly, murdered Sheikh Ja’afar Mahmud Adam, among other Sunni scholars. I would like Prof. to answer these few questions for us:

i. Who are Houthis in Yemen and what, who, and why are they fighting?

ii. What are the numerous Shi’ah militias in Iraq and Syria such as Mahadi Army, Mubtada Al Sadar Brigade, etc. doing?

iii. In Nigeria, is there any Shi’ah cleric murdered by Boko Haram? Zakzaky has in fact once exonerated them from attacking the Kano Shiiah trekkers in Kura, though a would-be bomber was arrested and confessed his connection to BH. Why did Zakzaky absolve BH and, incredibly enough, accused some unidentified others?

13) If any DIYYAH needs to be paid then Zakzaky should be the one to pay that, for he is largely responsible for the death of his susceptible followers by using them as a human shield. There are enough evidence and testimonies to support this assertion. The NA first of all defended themselves – and only a few people were killed or injured in the first altercation – and then tried to arrest Zakzaky as would any instituted authority. Had he surrendered as demanded, what followed up could have been avoided.

14) I honestly sympathize with Prof. for thinking that Islam is one of the greatest dangers to this country's survival. I wonder why he still calls himself a Muslim if he truly thinks the religion he professes and practices is dangerous. Everyone runs away from danger.

15) Governor Nasir El-Rufa’i is very right by dissociating himself from Shiite’s faith. It is a huge wonder that Prof. considers this wrong while he, despite all the irrefutable evidences that he is one of them, still denies being a member. This tells his followers/readers/students/etc a lot. It also says a lot on why so many others distance themselves from this creed.

May Allah guide us to the straight path, amin. God bless Nigeria, amin.