A famous line from Shakespeare’s celebrated Romeo and Juliet poses a question, thus: “What is in a name?” While Juliet believes that there’s nothing significant in a name, for Romeo will remain her heartthrob irrespective of his family’s name, affiliation matters in many other places such as Nigeria. The play, if adapted and set here, would (should) be different. There is so much meaning attached to names in the Nigerian socio-political context and discourse. Perhaps, that is why the former governor of the Nigerian apex bank, Sanusi Lamido Sanusi (SLS) quickly changed his name to Muhammadu Sanusi II when he ascended to power as the Emir of Kano in 2014.

Other possible reasons could be his effort to start life afresh, free of politics, and to maintain the tradition, and to revive the genealogy of his grandfather who was also an emir. The then SLS was well-known to be a very vocal, daring and assertive, public intellectual. Lo, the same old SLS keeps on resurfacing over and again though in the garb of an emir today. This, nonetheless, is not helping him, for the people he rules are by and large not comfortable with the way and manner he speaks up-front and too often. None of his predecessors was like that. But, perhaps unknown to the people, the masses, that’s what and how SLS has always been.

Based on the aforesaid, I would always prefer to call him Sanusi Lamido Sanusi in this write-up, for it is him I see in the emir and not a ‘reincarnated’ Emir Muhammadu Sanusi II as he wishes to be. But for some reasons, I will call him with the official title, the appellation he prefers. Yet, I would call on my readers to stop comparing him to his predecessors, notably the late Emir Ado Bayero as he was the one most of us grew up seeing as the Emir of Kano. The two are not, and can never be, the same. 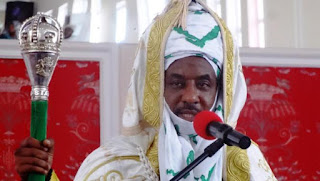 The torrent of the social media reaction that followed the Emir’s tirade at Kaduna Investment and Economic Conference (#KadInvest) held last week at Kaduna amuses me a lot. I laughed, and continue to laugh, at how energetically and enthusiastically some jokers in the name of modernism and neoliberalism extol the Emir as if his pronouncements were a revelation from God. This is not healthy. If they knew the man they praise-sing, they wouldn’t have done that. I thus think they need a refresher to recall and reflect on how he indeed is.


First, Sarki Sanusi is, literally speaking, a controversial fellow who wants to convulse the media every now and then. He too has admitted to this fact that he is a controversial individual. You may like him for saying one thing that is in tandem with your view today, but rest assured, prepare to place (or chew) his other sayings that may oppose your perspective the next day. The advice here is: praise him carefully.

Lest you forgot, what did he say over the cause of what led to the bloody Army/Shiites clash in Zaria? He impliedly believes that it was a God's punishment for their abuse of the Prophet's companions. But being what he is, he, during the KadInvest conference, univocally criticised the governor of Zamfara state, Abdulaziz Yari over a similar, theologically-inspired statement on the outbreak of meningitis disease.

Second, I know you hate Ibn Taymiyyah and co., but your man, Sarki Sanusi does not. Although he is the President General of Tijjaniyya Sect, he, reliably speaking, respects the Sheikh and other Sunni scholars. I was told of an instant he openly ‘dissed’ a friend for abusing this (in)famous scholar. From yet another angle, Sarki Sanusi practices polygyny as he has four wives. But do you, honestly speaking, like, or even consider, that as anything modern? The hint here is: praise him with caution.

Third, some of those hailing him today, especially from the other divide of the country, were the same people who called him names when he championed the establishment of the non-interest bank in Nigeria. As one of the many rebuttals of their invectives, he publicly challenged them to establish theirs in compliance with their religion. Nigeria is a secular country. On this, I say that no doubt, humans’ mind is fickle.

There are other several examples to cite such as his recent call on wives to retaliate when their husbands slap them; his alleged proposal to the government to illegalise polygyny for poor men; etc. As far as I can see and say, Sarki Sanusi stands to be both loved and hated, praised and condemned. He merits these different judgements for more than a few reasons as aforesaid. I, for once, will not and never disdain anyone for seeing the man differently from my own viewpoint. After all, nobody is a ‘must-love’ or ‘must-hate’, or ‘must-praise’, etc. Again, nobody tells THE truth. For instance, non-Muslims don’t believe in the Prophet Muhammad (SAW) message, nor do we (Muslims) regard their deities the same way they do. The point here is: if a man like the Prophet could be disbelieved and you respect those who do that for that is the way they follow, why would you condemn downright others who disagree with your ‘Reformer’, I mean the Emir?

It is all about opinion, and that is a subject of individualism. And, please, don’t twist my submission. I am not capitalising on the content or the context of his diatribe, though I can, as there is so much I find correct and incorrect, my concern here is on how it (i.e. the tirade) was received, and the reaction it generated. If you agree with him, fine. That, nevertheless, doesn’t mean your opinion is superior. Respect others’ opinions and move on. Apply what you believe can better the North - as the Emir's anger was/is purportedly due to our bedevilling problems - no matter how little, and that’s all. After all, the change should begin with you.